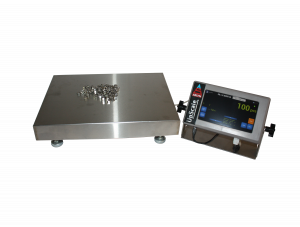 While strain gage is the most common weighing technology because of its good accuracy and lower costs, force motor has become the alternative for high precision weighing. Yet this second technology has some innate flaws and a high cost that make it a less than ideal solution.

Purchasing managers and industrial engineers have often had to make a difficult trade-off between cost and accuracy, but that’s where our new weighing technology comes into play.

Let’s explore each technology so you can decide which one best meets your weighing needs.

This design has become the industry standard over the last half a century. When the shape of the resistor (in this case the strain gage) is allowed to change, the resistance value also changes.

Strain gages are generally manufactured from a flat foil material, shaped into a long serpentine path and carefully bonded to a spring element called a load cell.

The load cell bends when weight is applied to the platform, which changes the shape of the gage and consequently increases its resistance value.

Four strategically placed strain gages will typically be applied to the spring element and wired together to form a Wheatstone’s bridge.

This bridge is an electrical circuit that measures the unknown electrical resistance of the gage and turns it into a voltage output.

The voltage produced by the bridge is passed through an ADC (analog to digital converter) and the digital signal is sent to the scale’s display where you read the weight of the object you’re weighing.

The precision of a strain gage scale is affected by several factors, especially the fact that the scale’s resolution is tied to its capacity. So higher capacity scales that use this design aren’t as accurate as lower capacity ones.

A perfect load cell doesn’t exist because it would have to be a perfect spring, bending in perfect proportion with the weight applied to it. When the weight was removed, it would return to its exact starting position.

But a spring with unlimited bending potential will eventually undergo plastic deformation and lose the characteristics that make it a good spring. Kind of like the Slinky you handled too roughly as a kid that never returned to its perfect coil or worked how it was supposed to.

In an ideal world, a change in length would be the only thing that caused the resistance of a gage to change. But resistors exist in the real world where many other influences come into play.

Fluctuating temperatures are the largest cause of error, but microscopic abnormalities in the gage material and simple age can also introduce errors.

Quality manufacturers bond strain gages to the load cell using a very thin, smooth layer of glue. Yet even the most careful application is never perfect simply because glue has no spring characteristics and restricts those of the load cell. This means that the exact bending of the load cell can never be transmitted to the gage.

The conversion from analog to digital signal can also introduce errors into the final measurement.

In fact, the most powerful benefit to this technology isn’t actually any inherent design advantage. Rather, it’s the fact that they’re mechanically simple as far as scales go. That makes them easy to construct and maintain. In many situations, they’re relatively reliable as well.

Engineers from a wide variety of disciplines have opined that the simplest system is often the best because it has the fewest moving parts. There are a number of devices that went to market and dropped scope from the drawing board to ship time simply for this reason.

Fortunately, while they have some serious drawbacks other technologies have stepped in to take their place. New types of scales may not suffer from some of these issues, which is why we at Arlyn have worked to promote alternative industrial equipment for some time now.

This design was introduced when it became clear that businesses needed higher precision measurements than strain gage scales offered.

Instead of a load cell, an electromagnet is used to support the weight of the platform and anything on it. Weight is measured by determining the amount of electrical current required to keep the platform balanced. While there are slight variations to the design based on the manufacturer, force motor scales typically use a simple lever and fulcrum. Attached to one end of the lever is the weighing platform, where you’d place your sample. On the other end is a force coil suspended in a magnetic field.

Weight is measured by determining the amount of electrical current required to keep the platform balanced. A displacement detector and power amplifier produces a current that holds the lever balanced in the null position while weight is applied to the platform. The amount of current necessary is directly proportional to the weight on the pan. A microprocessor is usually used to monitor the current that is produced in response to the applied weight and sent the information to the scale’s indicator.

While this is an intrinsically more accurate way to determine weight, it’s also expensive and prone to error. Like strain gage scales, fluctuating temperatures can introduce error into the process.

The accuracy characteristics of these scales change over time, so manufacturers will apply an internal calibration mass to the sensor to reduce these errors.

Yet this significantly increases the cost of the scale and requires regular, even daily, recalibration in order to maintain accuracy. Imagine if you had to periodically take your scale off of the roster of usable lab equipment you have just because it needed to be repaired. This is yet another reason that several new types of weight scales have come into play.

Another major concern is that force motor scales are impractical at higher capacities. More electrical current would be required to support the platform or increasingly expensive and complicated systems would be required. That’s why the vast majority of these scales cap at a 25-pound maximum capacity, which isn’t very useful in high volume production and other industrial tasks.

The transmission of bulk wave between a transmitter and receiver that are a known distance apart will take a predictable amount of time. When the distance between them changes, so will the time it takes to transmit the wave.

This is a pretty revolutionary idea because it allows us to measure weight using a spring element load cell, which is cheaper to manufacture, without the disadvantages of the strain gage design.

There are a number of reasons why these types of weight scales have become so popular in such a short period of time. Much of the technology used to manufacture them has been developed in-house at Arlyn, so we strongly believe in them. If we couldn’t trust them with our own industrial and mechanical measurements, then we would never allow them to ship to our consumers.

We feel that we’re very much like our clients in that we’re a company that relies on our equipment to supply accurate measurements on a daily basis. As a result, we’d only ever pass something on to the consumer that we ourselves would want to use.

SAW load cells do not depend on stress or strain in the spring element, which means these forces can be reduced by at least 90 percent. Normal load cell errors are therefore reduced to an immeasurable level.

These time measurements are automatically produced in a digital format, which makes them inherently more accurate. Since no resistors are used, the innate issues with the strain gage design — like the ADC and bonding technique — are also eliminated.

This also makes things much more sustainable. You don’t need to periodically replace or recalibrate anything the way you might with other types of weight scales, so you won’t have to worry about equipment suddenly failing on you.

Best of all, there are countless use cases where this kind of equipment will fit in quite nicely.

SAW technology is currently available on bench and counting scales in capacities ranging from 5 to 1000 pounds. We’re currently working on applying this technology to higher capacity scales of 2500 pounds and higher.

Our Ultra Precision, SAW-driven scales are perfect for:

Our Ultra Precision Scales are ultimately able to give you much higher accuracy than strain gage scales at a similar cost. In fact, you’ll be able to save money over the long haul because these scales represent so much less in maintenance costs over their lifespan.

Speaking of lifespans, they should be able to hold up much better than most other competing technologies. That means you won’t have to replace them nearly as often either, which should help to ensure that they reduce costs even further. You might even find that you could continue to use a single scale for any number of years without an appreciable drop in accuracy or the quality of individual measurements.

Higher capacity SAW scales are actually about two-thirds the cost of a force motor scale and the accuracy is at least as good, if not better – even at higher capacities.

We’re currently expanding this technology to other industrial scale models including our cylinder, drum and floor scales.

Experience the difference SAW technology can make. Contact us through the widget on our site and ask about the type of gear that would best fit your individual use case. Our experienced sales personnel will be sure to find something that addresses all of your needs as well as your company’s own budget.