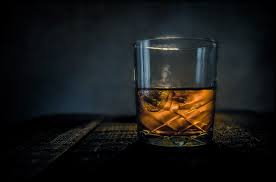 There’s no bad Whiskey. There are only some Whiskeys that aren’t as good as others. – Raymond Chandler, novelist and screenwriter

How Whiskey is Made: Pre-Distillation

Ultimately, every whiskey has its own consistency and character, and Scotch whiskey is no different. Commonly shortened to Scotch,Ó it is traditionally made using malted barley and peat fires are the preferred heat source. These fires are burned on the malting house floor and is what gives Scotch its unique aroma. Once malted, the barley is milled down to grist and enters the mashing process. Hot water of a particular quality and type is added to the grain; distilleries usually have a special water source. The sugar-rich water, called wort, is then collected from the bottom of the vessel, more hot water is added, and the wort is collected again. The last of the worts is not used for whiskey production. In wooden or stainless steel tanks called wash backs, carefully selected yeast is added to the mash and the mixture is left to ferment. The sugar slowly becomes alcohol and after approximately two days the fermentation process ends, with a liquid that has an alcohol strength between 5% and 15%.

How Whiskey is Made: The Distillation Process

This process is used to increase the alcohol content to as much as 90% and remove undesirable substances from the mix (such as methanol). The majority of Scottish whiskey follow tradition and are distilled twice. The still used depends on the variety of whisky being produced; traditional Scottish pot stills are best suited for single malts while Coffey stills are best for grain whisky. Many times an industrial continuous distillery is employed. However, each method requires the fermented liquid to be heated to its boiling point. (This temperature is lower than that of the pure water.) The alcohol evaporates into steam and is captured in a condenser. The liquid produced typically has an alcohol content of 20% and must be processed again. After the second distillation, it is possible that the liquid will have reached the 94.8% maximum alcohol by volume enforced by Scottish laws.

How Whiskey is Made: After the Distillation Process

Before being siphoned into oak casks for the maturation process, many recipes require the whisky to be Òproofed,Ó or diluted with water to achieve the desired alcohol content. By Scottish law, whisky must be allowed to mature a minimum of three years. After three years and a day, the spirit can officially be called whisky. As it ages, the whisky absorbs several components from the wood barrels it is stored in, which affects its age and color. This accounts for the difference between brands. Some of the oak casks may be second fill, having stored sherry or another liquor, while fresh casks are referred to as first fill, and may be specially charred for a unique color and flavor. Many popular brands of whiskey have an extremely long aging process that is three to four times longer than required by law.

What Makes a Superior Whiskey?

While we believe the secret to the formula is best left with the craftsmen, we know that at least part of it comes from the care and attention paid to the recipe, which is often passed through generations and kept close to the breast. Precisely measuring the ratios of grain, water, and yeast is part of the alchemy that is whisky making, and this requires industrial strength scales that can provide unparalleled accuracy.

However, there is another important consideration, and that is the safety of the distillery and everyone who works it. The high levels of airborne grain dust commonly found in this production environment can produce an explosion equally powerful to one occurring at a petroleum refinery if exposed to a source of ignition. Alcoholic liquids and vapors are flammable, which can also ignite or explode, causing serious damage to anyone or anything in the vicinity. These conditions may mean that the Department of Labor’s Occupational Safety & Health Administration (OSHA) has classified the distillery as a hazardous location in accordance with the standards for electrical equipment and installations set forth by the National Electric Code (NEC).

Our ArlynGuard B, C, F, and P scales have one or more components that have been tested and approved to be Intrinsically Safe for use in an impressive range of hazardous locations including:

Each ArlynGuard scale is equipped with one or more of:

Now you can protect your workers and the distillery without sacrificing the quality of your spirit. Whether you’re a small, independent distillery or a large, commercial one, our scales will accommodate all of your needs. Featuring small bench scales, versatile cylinder scales, rugged platform scales, and high capacity floor scales, we offer an internal resolution of one part in 500,000. As a factory direct manufacturer, we are in a unique position that allows us to offer customization options. From time and date stamping to computer connectivity and data storage options to non-standard platform sizes that fit into your existing production line, our US-based factory can design, manufacture and ship your scale(s) quickly. We’re also able to offer some of the most competitive prices in the industry, as we deal with no middlemen that drive up the cost.

As David Daiches, a Scottish Literary historian, critic and writer, points out, The proper drinking of Scotch whiskey is more than indulgence; it is a toast to civilization, a tribute to the continuity of culture, a manifesto of man’s determination to use the resources of nature to refresh mind and body and enjoy to the full the sense with which he has been endowed. Why choose any scale provider when you can work with a company that respects your craft and the careful skill it requires? Contact Arlyn Scales today and let us answer your questions and guide you through the selection process. When quality depends on precision, no one does it better than Arlyn!