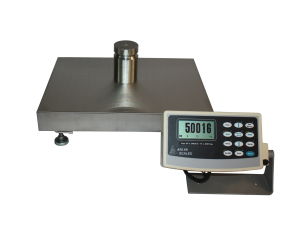 Electronic scales are some of the most common tools used in all types of industries.  When industrial engineers and purchasing managers are looking to purchase a new scale, they have two considerations in mind: accuracy and cost.

Currently, two technologies account for a large percentage of scale purchases in the weighing industry:

Thanks to the patented Surface Acoustic Wave (SAW) technology from Arlyn Scales, we’re able to offer our Ultra Precision Scales with the accuracy of magnetic force restoration scales at a cost that is more in line with high-end strain gage scales.

Available for nearly 50 years, strain gage scales have become the most commonly used scale on the market.  The basic concept behind strain gage technology is that the resistance value of a resistor will change if the resistor’s shape changes.

Strain gages are resistors often created from a foil type material, which is flat and formed into a serpentine path.  The gage is then attached to a spring element, which is called a load cell. Strain gages stretch as the load cell bends, causing the serpentine path to become a bit longer, which increases the resistance on the gage.

The problem with this approach is the fact that even careful applications can create a bond that hinders the effectiveness of the load cell.  The glue can restrict the spring characteristics of the load cell and may not correctly transmit the correct bending of the load cell to the strain gage.

A load cell would ideally be a perfectly responsive spring.  It would bend in a way that was directly proportional to the amount of weight that was being applied.  After the weight was removed, the load cell would then return to the same position from where it started.

The reality is that it’s nearly impossible to make a perfect spring.  When a spring has the unlimited potential to bend, it will deform and lose many of the characteristics that allow it to generate accurate measurements.

While in theory, a strain gage would change only in direct proportion to its change in length, this is simply not always the case.  With a variety of environmental factors in play such as temperature, as well as differences in strain gage materials and even the changes that may occur as the resistor ages, the accuracy of a strain gage can be affected.

High quality scales often use four strain gages to help form a full bridge, which in turn, helps to compensate for the various errors within in the load cell (as outlined above). Strain gages are also often placed just off the center axis of the spring element, which can help to reduce error.

Some manufacturers will also use temperature compensation resistors, which have characteristics opposite of the strain gages. These help to cancel out some of the effects of temperature. While these modifications help to reduce error, they cannot completely remove them altogether.

With magnetic force restoration scales, an electro-magnet supports the entire scale platform.  The amount of electrical current that is required to support the scale platform changes as weight is applied.  The scale is then able to determine the weight by measuring the amount of current used.

While this method is highly accurate, it’s also extremely expensive and can be susceptible to error.  Temperature changes usually account for a large number of errors with force motor scales.

The accuracy of these scales can often change over a long period of time, which can result in errors.  To reduce the likelihood of these errors, many force motor scales require regular recalibration.

Magnetic force restoration scales also become impractical when higher capacities are required.  Either greater electrical currents are needed to support the platform, or more expensive systems must be used to reduce the load seen by the force motor.

The concept of our patented Surface Acoustic Wave technology is that a bulk wave transmitted from a transmitter to a receiver, that are a set distance apart will take a predictable amount of time.

Our SAW load cells do not rely on strain or stress placed on the load cell, which allows these forces to be reduced by 90% or more. Consequently the typical errors seen with load cells are reduced to a level that is essentially immeasurable.

By using no strain gage, the errors with the gages and their adhesives are also eliminated.  The measurements taken from SAW scales are time measurements, which are digital and can be automatically read as a digital output.  This is much different than strain gage scales in which analog resistance readings must be converted to a digital reading—which can introduce inaccuracies.

Our SAW Scales offer higher accuracy than most strain gage scales at prices similar to those of other high-end scale manufacturers.  If you have higher capacity requirements, our SAW scales will generally be less than one third of the price of force motor scales with accuracy that is at least equal, if not superior.

If you’re intrigued by our Surface Acoustic Wave technology, feel free to reach out to our team via phone at 1-800-645-4301 or through our online contact form.  We look forward to hearing from you soon.