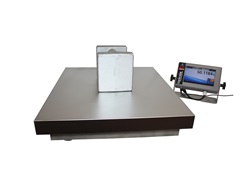 A DIFFICULT TRADE OFF

Industrial engineers and purchasing managers searching for a precise scale have to consider two main factors when making a purchase: cost and accuracy. When choosing between them, there’s often a trade off between the capacity and accuracy of the scale.

However, we’ve recently introduced a third technology that’s turned the industry on its head. Our second generation Ultra Precision Scales better the accuracy of force motor scales at a cost comparable to quality strain gage scales.

Our internationally patented Surface Acoustic Wave (SAW) technology is a method of measurement that’s never been applied to weighing. Its application has created an industrial scale with almost ideal weighing characteristics at a reasonable cost.

To understand the advantages of our SAW-driven scales, it’s important that you first understand the limitations of strain gage and force motor scales.

Over the last half a century, strain gage technology has become the industry standard. It’s based on the idea that resistance value changes when the shape of a resistor is allowed to change.

Strain gages are a type of resistor generally produced from a flat foil material that’s shaped into a long, serpentine path. The gage is carefully bonded to a spring element called a load cell.

When weight is applied to the scale platform, the spring element bends. This causes the strain gage to change shape and increases the resistance of the gage.

The precision of these measurements is affected by several factors. The main issue is that the resolution of the scale is tied to the scale’s capacity. Higher capacity scales aren’t as precise as lower capacity ones.

A perfect load cell would be a perfect spring, bending in perfect proportion to the weight applied to it. When weight was removed, it would return to its exact starting position.

Yet it’s impossible to make a perfect spring. A spring with unlimited bending potential will experience plastic deformation and lose the characteristics that make it a good spring. It’s like letting a kid stretch a Slinky; the Slinky never returns to its perfect coil and doesn’t work as well as it did when it was new.

2.    The adhesives used to bond the strain gage limit the spring characteristics of the load cell.

Bonding the strain gage to the load cell also introduces problems. A very thin, smooth layer of glue is important to quality manufacture. Yet even the most careful application is never perfect because glue simply makes a poor spring. It restricts the overall spring characteristics of the load cell and will never transmit the exact bending of the load cell to the gage.

In an ideal world, a gage’s resistance would only change because its length changed. The resistance would also be directly proportional to the length. But in the real world where the resistor exists there are many other influences at play.

Temperature change is the most common cause for error, but microscopic abnormalities in the gage material and the aging process can also introduce errors.

To compensate for the capacity/resolution dichotomy present in strain gage scales, manufacturers introduced force motor scales. This design uses an electromagnet to support the scale platform. The amount of electrical current required to balance the platform is measured to determine weight.

While this is an intrinsically more accurate way to determine weight, it’s also expensive and prone to error. Changes in temperature are also a large cause for error in force motor scales.

Error is also introduced as the scale’s accuracy characteristics change over time. To reduce this type of error, manufacturers will apply an internal calibration mass to the sensor. This device adds significant cost to these scales and requires regular recalibration to maintain accuracy.

Force motor scales also become impractical at higher capacities because more electrical current is required to support the platform, or increasingly expensive and complicated systems must be used for mechanical advantage and reducing the load seen by the force motor.

The transmission of a bulk wave from a transmitter to a receiver that are a known distance apart will take a predictable amount of time. When the distance changes, the transmission time will also change.

A REVOLUTIONARY IDEA IN THE WEIGHING INDUSTRY

Instead of resistance or opposing force, these scales use time measurements to determine weight. This is a revolutionary idea because it allows us to measure weight using a spring element load cell, which is cheaper to manufacture, without the disadvantages of the strain gage design.

Since SAW load cells do not depend on stress or strain in the spring element, these forces can be reduced by 90% or more. Typical load cell errors are thus reduced to a level that cannot be measured.

No resistors are used, which means the errors caused by the strain gage design and the bonding technique are also eliminated. The measurements are automatically produced in digital format because they’re time measurements, which eliminate the conversion from analog resistance and makes these scales inherently more accurate.

A VARIETY OF USES

SAW technology is currently available on bench and counting scales in capacities of 5, 10, 25, 50, 100, 200 and 500 pounds. These Ultra Precision Scales are ideal for precise chemical formulation, small parts counting, ink and dye manufacturing, research laboratories and in any other circumstance where high precision is a necessity.

At higher capacities, our SAW scales are about two-thirds the cost of a force motor scale and the accuracy is at least as good, if not better.

We’re currently in the process of expanding this technology to other industrial scale models including cylinder, drum and floor scales.
Experience the advantages of a SAW scale firsthand. Order an Arlyn Ultra Precision Scale today.