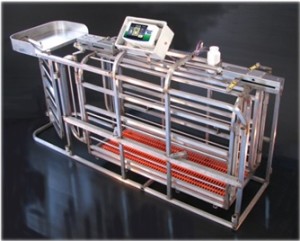 Every household has its own bathroom scale and every doctor’s office and hospital has many weighing scales scattered around among different rooms. Humans weigh themselves for two reasons for aesthetics and for health. Generally, there is a certain healthy weight range for every person based on his or her height. If somebody falls above that range, they might not be eating enough or there may be other health problems that must be considered. If somebody falls above that range, they may be eating too much or, again, there are health problems involved. Animals also must be weighed for various reasons. In veterinary offices and zoos, health is the most important reason for weighing animals. Pets and animals in the zoo have certain weights at which they are most healthy. A veterinarian or animal handler in a zoo might make recommendations for caloric intake based on an animal’s weight. It is also extremely important on farms to ensure that animals are kept healthy. Animals such as pigs, alpaca, and llama are major investments, and it is most economically viable for a farmer to make sure that his animals are healthy and infection-free. Weighing farm animals may alert a farmer to a sick animal if its weight is too low. When a sick animal is found, medication must be administered. Since all animals from pets, to wild animals in the zoo, to farm animals differ greatly in size, they cannot all be given the same dosage of medication. Weighing sick animals helps choose a proper safe dosage that will help cure the animal. Scales used with animals, such as electronic veterinary scales, and alpaca scales and llama scales, should be made with a very low profile. It is often difficult to get any animal, from an elephant to an alpaca to a dog, to step up onto a platform scale. The lower the profile, the quicker it will be to coax the animal onto the veterinary scale. Once on the platform scale, animals often will not stand still. This causes problems in weighing since the weight of the animal will shift onto and off of the platform, causing uncertainties in measurement. Arlyn Scales has developed a solution to this problem called Weight Average and Hold. When an animal is loaded onto the veterinary scale, the doctor or animal handler presses a button. At this point, the electronic scale begins storing the measured weight continuously. It saves every reasonable weight point, while throwing out any points that are out of a significant range from the average weight. Once a necessary number of weight points have been stored, these weights are averaged out and a final calculated weight is displayed. There are several other necessary requirements for animal scales. Since animal feces will often fall on the livestock scale, it is important to make the scale waterproof for an easy hosing-down. An aluminum frame is waterproof and it is also lightweight which lowers shipping costs. Since the platforms will often be wet, a non-slippery surface is necessary to keep the animals comfortable and stable. This is done by creating a diamond tread on the aluminum scale platform or by providing a rubber mat which is particularly comfortable for animals. Another use for animal scales is in the pork industry. Pork packagers and processors will give pig farmers bonuses if their pigs fit within a very narrow weight range and will penalize them if they are outside of this range. Automated Pig Sorters are the only solution available that allows farmers to maximize the number of pigs within the correct weight range, and therefore, maximize their profit. As a pig walks onto the sorting scale, a tail gate closes behind it, preventing other pigs from entering the pig sorter at the same time. The electronic pig scale weighs the pig, and based on its weight, a gate swings allowing the pig to enter into one feeding area. These sorters often have 2 or 3 different weight levels, but may have up to five. Pigs with lower weights are allowed into feeding areas that feed higher-calorie feed while pigs with higher weights are allowed into feeding areas that feed lower-calorie feed. Smart Soft Innovations, a division of Arlyn Scales, provides the option of including RFID chip readers in their automated pig sorters. RFID readers allow the farmers to keep track of the weight of every pig and run studies to maximize the efficiency of their farming.