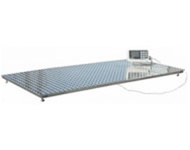 Digital Livestock Scales have served as a major advancement to the different weighing devices we solely knew of in the past.  Because of the significant role weighing and measuring weights has played in human lives, we’ve actually been using weighing devices for over 6,000 years.

Until the eighteenth century, weighing large loads like livestock and vehicles was considered to be extremely difficult and relatively impossible. Many changes have been made to platform scales to enhance their use, especially over the past two centuries, which has made weighing larger items much easier.

With present-day technological advances, many scales can actually measure an animal’s weight that stands at 0.1lb. Scales are now capable of handling the movement of animals while they’re being weighed.

The Importance of Weighing and Measuring Animals

Animals that are raised in captivity completely depend on human caregivers to attend to their needs and care for their overall wellbeing. In order to ascertain that each animal gets the proper dose of nutrition, exercise and medications, animals must be weighed individually on a consistent basis.

Similar to humans, each animal has a specific size or weight standard to be pitted against in order to determine whether they are susceptible to acquiring certain diseases or infections. These specific weights can indicate whether an animal has other mental or physical diseases, too.

Tracking an animal’s weight will also show when it’s time to alter their diet or exercise habits. For instance, if an infant is not growing at a normal rate, then that can be an indication that the baby is not completely healthy. Or it could be because of the infant’s mother.

In addition, if an animal appears to gain weight at a rapid pace, it might be a sign that the animal is pregnant or that it has a health issue. Sometimes, this can also be proof of the animal getting fed too many hormones in its feed process. Contrarily, if an animal shows major weight loss, this can indicate a lack in nutrition or signs of dehydration.

Weight gain or weight loss that’s associated to an animal’s odd behavior could mean that it’s suffering from a mental infirmity or emotional distress. Animals can suffer from depression, loneliness, and posttraumatic stress, just like humans can. This usually results in instances when an animal has been severely injured, neglected or abused, which can cause neurotic behavior.

Other Ways Animals Are Weighed

During competitions such as shows and races, animals are generally designated by their size, weight and breed. In order to properly weigh the animals, an accurate scale must be used to guarantee a fair competition. Just the slightest weight inaccuracy can result in the animal losing a competition.

An animal’s age can also be determined just from measuring their size and weight. This is especially useful for veterinarians that don’t have an accurate record of the animal’s background. In this case, a vet can just compare an animal’s weight with that of one from the same breed.

Knowing an animal’s accurate weight can also help its owner assess the animal’s life expectancy as well as is potential economic value. An accurate weight record can make it easier to ascertain that both the seller and its buyers get a fair market price for livestock.

Once an owner knows the weight and size of its animal(s), this will guarantee that the owner purchases the right products to care for its animal(s). Such products include harnesses, stock trailers, lead ropes, and cages.

An animal’s size, weight, and breed are all factors taken into consideration when selecting electrically charged fences as well as the materials of a fence.  If an animal is below or over the weight limits of a fence, this can cause an animal to be injured or even escape.

Digital livestock scales can actually be used for purposes aside from weighing livestock. These scales have been used to weigh everything from humans to manufacturing goods and other types of animals.

Livestock auctioneers and caregivers also use livestock scales. Veterinarians in addition to breeders, farmers, ranchers and zookeepers namely use digital livestock scales. They rely on the accuracy of these scales.

How to Choose the Right Scales

With several different veterinary and platform scales available in the market, choosing the right one can sometimes be tricky. Some scales are made for certain types of animals, such as those made for llamas and alpaca.

Just like animals comes in different shapes and sizes, so do scales. Some are made to weigh large animals, while others can just weigh small animals. Similarly, there are some scales that can measure animals of all sizes. Whenever you select a scale, you should make sure that the size and weight of the animals you’re weighing correlate to the type of scale you’ve selected.

Many people may use the terms “digital livestock scale,” while others call them veterinary scales. Some even refer to them as digital platform scales. Whatever name you use, be sure to keep in mind that the scale inhabits the following:

At Arlyn Scales, our scales are constructed from high quality materials that adhere to the aforementioned standards. Our scales are specifically designed to weigh all sorts of animals.

As a leader in the electronic scales industry for over 30 years, we pride ourselves in being able to provide our customers with the latest technology at an affordable price. If you have any questions or would like additional information about our digital livestock scales, contact us today. It is our pleasure to help you.