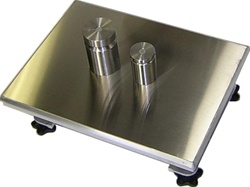 Since the age of the industrial revolution, we are seeing a faster rate of change per year than in previous years. Technology has gotten far more specific within the demands of each industry. In order to keep pace with these rapid fire changes, our dedicated and highly knowledgeable team of engineers and designers are constantly monitoring and researching new materials and new ways to cater to the accuracy and precision requirements of every industry that makes use of weights.

One such technological advance came in the form of our patented Surface Acoustic Wave Technology.

Prior to the onset of our superior third technology, there were two other technologies that industry had to choose from for all their weighing applications. Strain gage technology and Force Restoration, also known as Force Motor, technology were certainly viable options in less complicated times.

The Strain gage scales were the most widely used, mainly because they used inexpensive aluminum in their load cells and platforms. The accuracy of these scales was dependable and in higher end scales, such as those that we manufacture, the use of stainless steel in place of the aluminum increased the ruggedness and durability of these models.

The Strain Gage scales have been available for more than 50 years. As they measure the resistance utilizing spring technology, it is only a matter of time before the accuracy function of this unit will diminish. If the spring element bends too much, it will become deformed and the resistance factor diminishes. This mechanism is also adversely affected by temperature changes.

The industry tried and succeeded somewhat to avert these alterations by using 4 strain gages to form a bridge, thereby creating a more stable weighing platform. However, this did not completely eradicate the error factor.

Force Restoration relies on an electronic analytical scale’s measurement of the force needed to counter the mass being measured. As the weight load is placed on the scale, the amount of electric current needed to support the scale platform changes. The scale measures the electrical current and then determines the weight of the load. This methodology yields a very high resolution and accurate weight measurement, but is a more expensive means of garnering weight information.

Temperature changes also affect the accuracy of this device and eventually the scales need to be recalibrated. The internal calibration mass adds to the cost factor as does the cost of electrical current for large loads. The larger the load, the more impractical this scale becomes. The larger the load, the more prone they are to overload and shock loading. The prohibitive cost factor, ranging from 4 to 10 times that of the Strain Gage Scales, renders this an extravagant weighing solution for many operations.

Arlyn Scales’ engineers devised a third and extremely viable option by producing a technology that measures displacement as opposed to measuring stress or strain. This SAW technology utilizes the same technology that is used to fabricate semiconductor circuits, which yields a digital output of the highest accuracy value available today.

The SAW scales measure the time it takes for the bulk wave to travel the distance from the transmitter to the receiver. This form of measurement, using a spring element load cell has none of the disadvantages that the load cells in strain gages produce.

The temperature stability factor is far more exceptional than in either the Strain gage or the Force Scales.

The immediate digital output reading supplied by the Ultra Precision SAW scale means that you no longer need to convert analog resistance measurements. This direct digital technology adds to the fact that this technology is up to 20 times more accurate than the Strain Gage Scales.

For durability and rigidness factor ratings, Arlyn Scales’ engineers opted to use a large load cell block. This provides an extra high level of overload and shock tolerance, thus providing extra insurance in the form of a rating of greater than 500 percent capacity. Compared to the 150 percent rated capacity of the Strain Gage and the Force Restoration scales, this measure of security far outweighs the limits of its predecessors.

Even with the use of the higher priced stainless steel materials and the larger load cell blocks, the Ultra Precision Scales cost less than one third of the equivalent force restoration scale models and are in the same price range as high end Strain Gage Scales.

Only High Precision High Capacity Scales in the Market

This unique technology cannot be found in any other scales on the market. We are currently expanding this technology to other weighing platforms, such as cylinder scales, drum scales and floor scales and expect our SAW scales to lead the way for change in the advancement of weighing technology.

Very Rugged for Industrial Use

SAW technology is currently offered in bench scales and counting scales with the weight capacities of 5 pounds, 10 pounds, 25 pounds, 50 pounds, 100 pounds, 200 pounds and 500 pound models with more to come!

The Creep rating is substantially higher in our High precision scales with SAW technology, 1:40,000 as compared to 1:5,000 in the best Strain Gage Scale. It is because we use the best large load cell block available that the weight measured over time is consistent and doesn’t tend to be affected by the amount of time that a load is resting on the scale. This is yet another reason that our Ultra Sensitive Scale is a stand alone representative in the realm of cutting edge technologically advanced weighing equipment.

Arlyn Scales employs the best technical advisors who are at the ready to answer all of your weight related questions. Our team of technical weight specialized engineers are capable of creating a customized scale for just your specific Ultra Sensitive Scale needs.

Contact Arlyn Scales for more information through our online form at http://www.arlynscales.com/CONTACT-US-s/41.htm or by calling us at 800.645.4301.