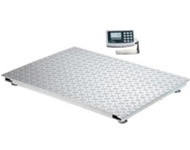 There are several different parameters that are regularly measured in different industrial processes. Some of these are temperature, moisture content, strength, material content, texture, and color. But perhaps the most important is weight.

This parameter is used when different components must be mixed together to achieve the desired result. It is also used for dispensing and packaging. Shipping and receiving is another area where weight information is critical. A wide variety of different kinds of industrial scales are the type of instrument which is used to measure the weight. These include:

All of these different types of scales rely on the transducer device which converts a force into an electrical signal. This device is often called a load sensor, or load cell. Larger floor scales and platform scales often use four load cells in each scale, one in each corner of the platform. Smaller scales most often only include a single load cell.

The electrical output from most standard load cells are very small, millivolt level signals. Higher quality industrial scales compensate the load cells for temperature so that the output signal remains quite constant for a given load. The output is often buffered and then directed to an analog to digital converter for processing by the scale before being displayed for the user.

Load cells may be built in a wide variety of different shapes and sizes, depending on the type and size of scale. Most larger platform scales use beam load cells that measure a level of shear. Bench scales may use single point load cells that measure strain. In both cases, thin sections of metal are supported by larger metal frames while the entire device is designed to act as a spring element.

Strain gages adhere to the thin metal sections. These gages measure either shear or strain, and thereby determine the amount of the load on the load cell. Those load cells that are designed for large platform scales must have thicker bending elements and a larger support structure. That is also the case on the single point load cells. Ideally, the load cell will act as a perfect spring. When a load is placed on it, the amount of output will be perfectly proportional to that load. When the load is removed, the load cell should return perfectly back to its initial position. Furthermore, the load cell should not be affected by temperature changes or other environmental conditions.

Unfortunately, there is no such thing as a perfect spring element. Some things which affect the spring properties include the choice of metal used, the shape of the load cell, the manner in which the load cell is manufactured and the heat treating process of the metal after manufacture. Probably the most important of these is the type of metal used. There are a number of alloys of aluminum, steel and stainless steel that are considered to be standard.

Each of them has benefits and disadvantages:

A major advantage of aluminum is that it is easy and inexpensive to machine into the desired final shape. For this reason, it is the most popular choice for bench scales and other lower capacity industrial scales. But it has fairly high-temperature coefficients. It is also most prone to deformation due to shock and overloads. Steel is also widely popular, especially for digital platform scales and digital floor scales. The material itself is considerably less expensive than stainless steel. It is also much easier to machine than stainless.

But because of the corrosion properties, steel load cells must be nickel-plated. This material is also not as rugged as stainless steel. Generally, the highest quality scales, such as the Arlyn brand of Industrial Scales, will use stainless steel for the load cell. The most popular alloy choice is known as 17-4 precipitation hardened material. It has excellent spring properties and has good corrosion resistance. But the heat-treating process must be carefully regulated, adding an additional cost. It is also a difficult material to machine.

In order to address the design vulnerabilities and limitations posed by strain gage scales, we’ve taken the same basic theory of load cell design seen in strain gage scales and applied our internationally patented surface acoustic wave (SAW) technology. It’s the first new major weighing technology to have been created in the last 40 years. SAW offers extremely precise measurements that are 10 to 20 times better than strain gage scales, reliable in even the most difficult industrial environments, and about 2/3 less expensive than an MFR (Magnetic Force Motor) scale.

Instead of strain gauges, we place two SAW transducers at opposing ends of the spring element. When weight is applied to the scale’s platform, it creates a bulk wave in the element’s substrate. This wave carries to the transmitting transducer and is passed to the receiving transducer. It’s passed through an amplifier and sent back to the transmitter to create a feedback loop.

Our SAW transducers are fabricated using semiconductor-grade crystalline substrates and electronics are deposited on it using the same photolithography process used to manufacture advanced semiconductor devices. This allows our SAW load cells to provide a fully digital output stream whose precise, high-resolution measurements are inherently more accurate than those provided by a strain gage load cell.

And while they take extremely sensitive measurements, they don’t need to be handled gently. This manufacturing process creates an extremely durable weighing device that is not affected by temperature changes, air currents, or vibrations from other machinery, which means you won’t experience the same drifts in accuracy as an MFR scale. We’ve designed our Ultra Precision Scales with SAW technology specifically for use in rough industrial environments.

Arlyn Scales for All Your Weighing Needs

We’ve been leading the weighing industry with new scale technologies and features since 1978 and don’t plan to stop now. SAW technology is one of our most recent contributions, but we’re also working on many other projects that will improve the accuracy, usability, and systemization of our products.

Yet one of the best things about choosing Arlyn Scales for your weighing needs is our factory direct quality and pricing. This means no markups from other distributors or dealers who want to make a profit off you. You pay for the cost of manufacture and get a superior weighing device.

If you’ve been putting off the idea of upgrading your industrial scale, now may be the time to finally take the next step. At Arlyn Scales, we’re confident we can help you find the ideal scale for your needs at a price that’s within your budget. Contact our team today through our online form and we’ll respond right away to determine which of our custom solutions could be your best fit, or else something entirely unique for you. We’re confident that you’ll come to trust our load cells for all your weighing needs.