The load cell is one of the most important internal components of an industrial scale because it’s the device responsible for the accuracy of your measurements. It’s a type of transducer (a device that converts one form of energy into another) that translates force into an electrical signal.

When an external force (the weight of the object you’re weighing) is applied to a stationary object (your scale), it causes stress (an internal resistant force) and strain (displacement and deformation) in the stationary object.

Within your scale’s load cell is a device called a spring element, which is a specialized metal device that’s attached at either end to the floor of the scale and the underside of the platform. This is the stationary object in your scale that experiences stress and strain when weight is applied to the platform.

A strain gage is a sensor whose resistance varies with applied force. It is the device within your load cell that actually converts weight into a measurable electrical resistance. When the scale is assembled, strain gages are bonded to the flexures of the spring element and wired together to form a Wheatstone’s bridge. The bridge is a simple circuit that produces a voltage output based on the resistance of the strain gages.

When weight is applied to the platform, the spring element bends. How far it bends is directly proportional to the weight applied to the platform. This bending causes the flexures to bend, which changes the resistance of the gages. The changing resistance of the gages creates a change in the voltage Wheatstone’s bridge, which is sent as an analog signal. This analog signal is then passed through an ADC (analog-to-digital converter) and the digital signal is sent to the scale’s indicator where you read the weight of the object.

Strain gage load cells are the most common choice in scale design because their accuracy characteristics are appropriate for a good majority of industrial weighing. When manufactured with high quality materials (like stainless steel), they’re sturdy, durable, accurate, and reliable.

However, a good majority still isn’t everyone. There are industries that require a higher level performance and better accuracy from their scales because extremely small differences in weight (for example, .0967 lb.) can affect the quality, consistency, and usability of their final product.

Why Strain Gages Aren’t a Solution for High Precision Applications

Accuracy is the determination of how close a scale’s measurements come to the true weight value of an object. The accuracy of strain gage load cell is slightly affected by the ADC signal conversion, the adhesives used to place the strain gages onto the spring element within the scale, and other similar factors. So while all scales deviate from this true value, strain gage load cells have a deviation that’s too high for ultra sensitive applications. Ultimately, the amount of deviation seen depends on the type of scale you use and the standards of the manufacturing company.

Strain gage scales are generally accurate to 1/10 of 1%, which means measurements can deviate from the true value by ± 0.1 lb for a 100 lb capacity scale. And while 0.1 lb isn’t usually enough to affect the outcome of a product (no one’s complaining about extra chocolate chips in their cookies, after all!), it can be disastrous for the consistency of a paint mixing company’s palette since that much dye can mean the difference between Dinner Party Red and Townsend Harbor Brown.

MFR scales use an electromagnet and fulcrum/lever system to oppose the weight of any objects placed on the platform, eliminating the load cell system entirely. However, they’re not practical for industrial applications because they’re sensitive to drifts in accuracy due to changes in temperature, air currents, and vibrations from other equipment, which are all common to industrial environments. They’re also delicate and prone to damage if used roughly.

And not only are MFR scales temperamental, they also have extremely low maximum capacities. Fifty pounds is highest, but usually it’s more like 12 to 15 lbs. So while they do provide the high resolution measurements required by these industries, they don’t really do it in a meaningful way.

In order to address the design vulnerabilities and limitations posed by strain gage and MFR scales, we’ve taken the same basic theory of load cell design seen in strain gage scales and applied our internationally patented surface acoustic wave (SAW) technology. It’s the first new major weighing technology to have been created in the last 40 years. SAW offers extremely precise high resolution measurements that are 10 to 20 times better than strain gage scales, reliable in even the most difficult industrial environments, and about 2/3 less expensive than an MFR scale.

Instead of strain gages, we place two SAW transducers at opposing ends of the spring element. When weight is applied to the scale’s platform, it creates a bulk wave in the element’s substrate. This wave carries to the transmitting transducer and is passed to the receiving transducer. It’s passed through an amplifier and sent back to the transmitter to create a feedback loop.

Our SAW transducers are fabricated using semiconductor-grade crystalline substrates and electronics are deposited on it using the same photolithography process used to manufacture advanced semiconductor devices. This allows our SAW load cells to provide a fully digital output stream whose precise, high-resolution measurements are inherently more accurate than those provided by a strain gage load cell.

And while they take extremely sensitive measurements, they don’t need to be handled gently. This manufacturing process creates an extremely durable weighing device that is not affected by temperature changes, air currents, or vibrations from other machinery, which means you won’t experience the same drifts in accuracy as an MFR scale. We’ve designed our Ultra Precision Scales with SAW technology specifically for use in rough industrial environments.

One measure of performance scale manufacturers use is readability, which is generally expressed as parts of a whole. To determine the readability of a scale, you divide the maximum capacity by the resolution. So, for example, a 10 lb. capacity strain gage scale with a resolution of 0.002 lb. would have readability of 1 part in 5,000 because (10/0.002 = 5,000). Ultimately, this means the scale can display 5,000 unique weights been 0 and 10 lbs. with an accuracy of 1/10 of 1% (or ± 0.1 lb.)

SAW technology has improved the readability of Ultra Precision Scales to 1 part in 100,000 and an accuracy of 1/100 of 1%. This means they have 20 times better readability and 10 times better accuracy than strain gage load cells. Because our SAW transducers require such little bending from the spring element and take digital measurements, we were able to improve the performance of our scales by 2,000%!

Unlike MFR scales that cap out with a maximum capacity of 50 lbs., our Ultra Precision Scales have a maximum capacity cap of 500 lbs. or higher. And while a 500 lb. capacity strain gage scale offers a resolution of 0.1 lb, our SAW scales offer an unrivaled precision of 0.005 lbs. at the exact same capacity!

Arlyn Scales for All Your Weighing Needs

We’ve been leading the weighing industry with new scale technologies and features since 1978 and don’t plan to stop now. SAW technology is one of our most recent contributions, but we’re also working on many other projects that will improve the accuracy, usability, and systemization of our products.

Yet one of the best things about choosing Arlyn Scales for your weighing needs is our factory direct quality and pricing. This means no markups from other distributors or dealers who want to make a profit off you. You pay for the cost of manufacture and get a superior weighing device.

So if you have questions about our SAW scales or need guidance during the selection process, contact us today! We can discuss the benefits of our standard industrial scales, ultra-precision 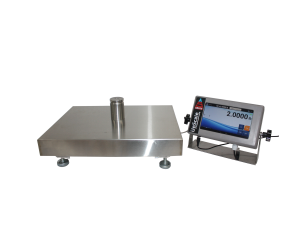 SAW scales, or the possibility of a custom solution. We’ll help you find what you need without trying to sell you something that you don’t.