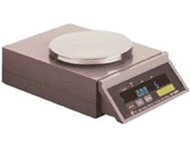 If you were to travel back in time and show an ancient street merchant a digital weighing scale, he would have no idea what to do with it. However, over the entire course of history, scales have been just as important to the economy.

Today, commercial scales play a fundamental role in the processing industry. From agriculture to pharmaceuticals they provide businesses with a consistent means for measuring incoming and outgoing materials prior to further distribution.

Let’s breakdown the examples of the two types of scales categories you will still encounter no matter the industry: analog and digital scales. At Arlyn Scales, we have been in the business for over 30 years and have helped lead the evolution of these basic instruments into the sophisticated machines they have become.

The most ancient scales were simple balances. These devices consisted of a lever with two pans suspended at equal distances from the fulcrum. When an item (such as a sack of gold coins) was to be weighed, it would be placed in one of the pans.

However, as opposed to the original simple balances, the triple-beam balance takes advantage of the concept that a mass further away from the fulcrum of the lever creates more force on the lever than a mass that is closer to the lever.

Therefore, rather than requiring equivalent weights on both sides of the lever to put the balance and equilibrium, the triple beam balance is used by moving smaller weights closer and further from the fulcrum to balance out the weight of the object on the other side of the lever.

One of the most well-known usage for spring scales is the bathroom scale, which combines the force of four levers coming from each corner of the scale to stretch a spring and spin a gauge.

Today, analog scales are a perfect solution when a weight measurement does not have to be very precise. They are useful to determine a person’s body weight to within 1 pound or to measure out a serving of meat within a few ounces. However, they are not accurate enough for many industrial processes that require very high levels of precision.

The leading analog load cell is called a strain gauge load cell. It measures the stress and strain of the load on the platform. Strain gauges are special resisters that are bonded to a spring element. The element bends when a load is placed on the scale platform. This causes the strain gauge resistors to stretch specific amounts, which changes their resistance. The resistors are wired together into the form of a Wheatstone Bridge.

This means that a change in resistance changes the voltage coming from the bridge. The voltage signal is typically sent along a wire to the digital indicator. An Analog to Digital (A/D) converter changes the voltage reading to a digital value and the microprocessor in the digital indicator then uses that value to determine the weight that is on the scale platform. Now, the voltage signal that comes from the load cell and through the wire can be subject to interference from the work environment.

This can cause inaccuracies when the A/D converter creates a digital value. Some manufacturers and engineers have put the converter right at the load cell, hoping this would end the interference issues. It can reduce errors in some situations, but not very significantly. While it is often given the title of Digital Load Cell, it is still just an analog load cell with a digital converter.

While a spring scale may have a resolution of 1 part per 100, industrial processes require resolutions of 1 part per 5000 or even higher. Digital scales have taken over as the most precise measuring devices and are by far the most widely used in the industry. The electronic scales that are used in the industry include bench scales, platform scales, floor scales, drum scales, and cylinder scales.

The weight transducer used in digital industrial scales is called a strain gauge load cell. The load cell is a block of metal that is shaped in a way so that it bends, much like a spring, in a very predictable manner when a force acts upon it.

Additionally, like a spring, when the force is removed, the load cell moves back to its original configuration. Attached to the load cell are several strain gauges. These are resistors made up of folds of flat metal. When the load cell bends and the strain gauges are stretched, their resistance changes proportional to the amount of force acting on the load cell.

The output signal from the strain gauges is sent to an analog to digital converter which outputs a final weight reading. Ordinary strain gauge digital scales have resolutions of about 1 part in 5,000.

Arlyn Scales has developed an internationally patented line of Ultra Precision scales, using a technology called Surface Acoustic Wave (SAW). The SAW load cells deployed in our scales do not use strain gauges and have a resolution of an incredible of up to 1 part in 200,000. These load cells measure displacement rather than stress and strain. Solid-state transducers are used instead and the frequency of the transducers changes as the weight on the platform changes.

Since the frequency is already a digital signal, and the microprocessor measures this signal digitally, the precision is inherently better by an order of magnitude, and the interference problems seen in strain gauge load cells are eliminated. These scales are particularly useful in situations where high precision is necessary, such as check weighing and polymer production.

Since SAW load cells are measuring the displacement of the sensor due to the load on the platform, they are able to be constructed out of a thicker more durable metal. This allows the load cells to be more abuse-resistant and less vulnerable to shock loading or overloading.

Additionally, our innovative technological breakthrough enables our Ultra Precision scales to measure far beyond what is typical for high-resolution scales. Normally, the kind of accuracy seen out of a high-resolution scale, such as a force motor scale, would be limited to a weight of 50 lbs. or less. This kept precision measurement mostly in the laboratory, computer industry, or small scale production for formulated items like pharmaceuticals, paints, and petrochemicals.

Our SAW scales are capable of providing high resolution and high accuracy up to 1000 lbs. With an Arlyn Ultra Precision SAW scale, you will be able to have precision accuracy at an industrial size. With our optional setpoint controller, you can program your scale to add specific amounts to various component parts to create the total batch of your product.

And with our computer connectivity options, you will be able to analyze and refine your automated process and procedure so you are not wasting an ounce of material. By cutting down waste and human error while simultaneously increasing automated speed and consistency, you will be surprised how much money you can save.

Buy Scales That You Need From Arlyn Scales

Whether it is for industrial or commercial use, it is crucial to have a reputable product whose measurements are as precise as possible.

A good supplier will know their products and their capabilities. They will be able to offer excellent customer service by answering questions and providing suggestions. Their products will be top of the line because dependable equipment is at the heart of the production process.