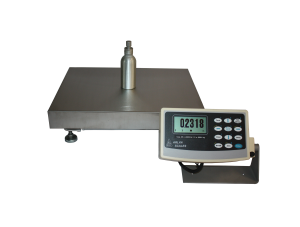 While both of these scale technologies have numerous positive qualities, they have their weaknesses too. Strain Gauge load cells, for example, are typically made with sections from thin metals, such as aluminum, which make it possible for these scales to produce accurate weight readings; however, the materials used in Strain Gauge scales are usually fragile, which makes them susceptible to damage. Magnetic Force Restoration scales provide extremely precise measurements, but, unfortunately, their maximum capacity is usually between 25 and 50 pounds. And they are usually very expensive, and even more fragile.

Arlyn Scales, a leader in industrial scale technology and design for over 30 years, saw what the weighing industry was lacking: an affordable scale that could endure heavy loads while still producing extremely accurate weight readings. Therefore, our company created a newly patented scale technology, Surface Acoustic Wave (SAW), for scales that could do just that.

Within a SAW scale there are 2 transducers, which are devices capable of converting energy from one form to another. 1 transducer acts as a transmitter and the other serves as a receiver. The 2 transducers are set a certain distance apart inside the scale and when an object is put on top of the scale’s platform, distance between the 2 transducers increase. The amount of time it takes for the surface acoustic wave to reach one transducer from the other varies depending on the distance between the two, which relies on the weight of the object on the platform.

SAW technology makes it possible for an object to be accurately weighed by measuring the amount of time it takes for a wave to travel between two transducers. After measuring the fluctuation of the wave, a SAW scale is able to generate an accurate digital weight reading, which is then displayed on the scale’s digital indicator.

Why is Accuracy Important?

When businesses depend on weight measurements to mix ingredients, determine shipping costs, or keep track of inventory, ensuring weight readings are as precise as possible is tremendously important.

In front of you there are two 100-pound capacity scales—one utilizes Strain Gauge technology and the other operates with SAW technology. It is your goal to gather a sample weight before measuring a large batch of small identical objects.

10 of the objects you plan on weighing are in your hand and you know that each individual piece weighs exactly .0954 pounds. Before weighing a larger quantity of the objects, you want to ensure that the scale you’re using can produce an accurate weight reading of the objects.

With a resolution of .02 pounds, the Strain Gauge scale tells you that each piece in the sample of 10 objects weighs .96 pounds. This is a 2.5% error that would impact the accuracy of every batch of objects weighed based on this sample.

Using the SAW scale, however, the margin of error is reduced to just .03%, because a 100-pound capacity SAW scale with .001 resolution will tell you that each item in this particular sample weighs .0954 pounds.

The results of the Strain Gauge scale in this sample may not seem too drastic; however, for businesses, the slightest inaccuracy can impact production costs, shipping costs, product inventories, and more. When the smallest error in weight readings can make a company lose money or affect business processes, then you can bet that extremely precise measurements are capable of progressing one’s efficiency and success.

A Breakthrough in Technology: Accurate Results and High Weight Capacities

Unlike Magnetic Force Restoration scales that can only withstand up to 25 or 50 pounds, SAW scales can deliver precise weight readings for objects from 5 to 1,000 pounds. And they can withstand up to 2.5 the rated weight load without being damaged.

So now you know: SAW scales deliver extremely precise weight readings and are exceedingly rugged. But there is so much more a SAW scale can do for your company.

Furthermore, all of our scales can be connected to Ethernet and Wi-Fi, or can have a USB port installed. Connectivity options make it possible for companies to document and analyze the data their scales record. By inputting data onto a database such as Excel or Access, companies can further improve their weighing processes and progress the efficiency of their business.

Arlyn Scales understands the importance of accuracy, durability, and affordability. As experts in weighing technology and design, we knew exactly what was missing in the scale industry before Surface Acoustic Wave technology was born. If you would like to learn more about SAW technology or the wide selection of SAW scales we supply, check out our website. If you have questions and would like to speak with our knowledgeable staff, give us a call at 800-645-4301 or fill out our online contact form.