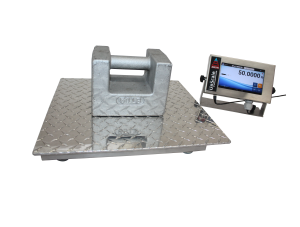 Magnetic Force Restoration scales are typically the go-to option for people who need extremely accurate weight readings. MFR scales are considered to be the most accurate of industrial-grade scales, but they are usually only made to accommodate maximum capacities of 50 pounds or less.

Before Arlyn Scales created Surface Acoustic Wave technology and Ultra Precision Scales, there was a big problem. People who wanted to weigh heavy objects had to sacrifice accuracy. Fortunately, Arlyn Scales realized the issue and came up with a solution.

Ultra Precision Scales manufactured by Arlyn Scales are unlike any other type of industrial scale because they utilize Surface Acoustic Wave technology, which is patented by Arlyn Scales. In every Ultra Precision Scale, there are 2 SAW transducers placed at opposite ends of the spring element. When an object is placed on the scale platform, a bulk wave is generated from one transducer and passed to the other. The second transducer takes the wave, amplifies it, and sends it back to the first transducer. The frequency created between the two transducers is dependent on the distance between the two transducers, which is in direct correlation with the bending of the spring element/weight of the object on the platform.

To determine the readability of a scale, the maximum capacity is divided by the resolution. So, looking at a Strain Gage scale with a maximum capacity of 10 pounds and a resolution of .002 pounds, the readability would be 1 part in 5,000 (10 / .002 = 5,000). This means that this particular Strain Gage scale can display 5,000 unique measurements between 0 and 10 pounds with an accuracy of 1/10 of 1 percent.

No matter what type of weighing technology a scale encompasses, there are a number of environmental factors that can influence the accuracy of the results produced by industrial scales. It’s important to know that there are some influences that can be fixed easily or avoided altogether. For example, in many industrial locations, dust or dirt can build up under the platforms of scales overtime. This can affect the accuracy of weight readings produced by the scales, but it can be reversed easily—the scale just needs to be cleaned!

As far as other environmental factors, such as wind, vibration, temperature fluctuations, etc., certain scale technologies are better at preventing interferences than others. Oftentimes, scales are sensitive to small amounts of air movement generated by air ducts or air conditioning units. Their results can also be affected if there is any nearby equipment that gives off vibrations. Many of these issues can be avoided, but it’s important to know that these factors can influence scale accuracy.

Arlyn Scales Come Pre-Calibrated and Can Re-Calibrate Themselves

Overtime, scales lose their accuracy. It’s just the way things happen. When a scale produces inaccurate results, then it means that it is time for the scale to be re-calibrated. This simply means returning the scale to its original balance.

Arlyn Scales is the proud supplier of industrial scales that are capable of measuring high capacities while providing extremely accurate results. If you are in the market for a high quality industrial scale that can measure heavy objects without sacrificing highly accurate weight readings, then visit Arlyn Scale’s website today.

On Arlyn Scales’ website, you can learn more about Ultra Precision Scales, Surface Acoustic Wave Technology, and all you need to know about the industrial scales Arlyn Scales designs and manufactures. If you have questions about any of the scales Arlyn Scales makes, do not hesitate to contact our team by calling 800-645-4301 or fill out our online contact form.