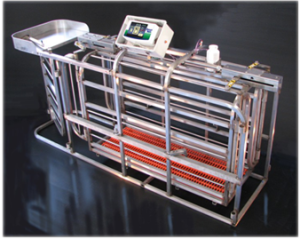 The pig farming industry has always needed to carefully control costs and maximize sales in order to maintain a profit. This becomes especially important during times when the cost of feed is high or there is an oversupply of pigs causing the price of pork to drop. One or both of these conditions seem to apply to the market at any given time. One of the key elements of obtaining the best price for a pig is to assure that it has reached the correct market weight at exactly the correct time. Packers and producers are very sensitive to this target weight. There are significant bonuses for pigs whose weight falls into a very narrow target range. Conversely, there are penalties for animals that fall outside of this range. The most successful arrangement for assuring the correct animal weight is to weight the animal regularly as it is being raised. Automatic Sorting Scales are the perfect device for this purpose. These scales are placed in the path of the pigs as they walk to their feeding areas. They consist of a cage with input gates, known as the tail gates, output gates, known as head gates, and swing gates. To begin the process, the tail gate will open allowing the pig to enter the sorter. When the scale detects that the pig has fully entered into the cage, the tail gate will shut. The scale can now obtain an accurate weight for this animal. Depending on its weight, a single swing gate may move to direct the animal to higher nutrition feed, if faster weight gain is required, or lower nutrition feed if the animal is above the target for that specific time. This would be considered to be a two way Sorter. Some Automatic Sorting Scales, such as those offered by Arlyn Scales, are equipped with a number of swing gates, allowing the animals to be sorted to as many as five different feed areas. The head gate may then open, and the pig will proceed to the correct area. Very useful data may be obtained from these pig scales. General statistical data will allow the farmer to determine if the pigs are gaining weight properly. As data is compared from one time period to the next, the average daily weight gain may be calculated. Also for statistical purposes, each weight collected can be assigned to a number of groups. By evaluating this group data, the proper nutritional decisions may be made. Pig Sorters must be constructed to be extremely rugged and strong. A fully grown animal can apply tremendous forces to these scales. The environment can also be very corrosive. Therefore, most automatic sorting scales are constructed from stainless steel tubular frames. The frames are carefully welded to provide reinforced strength. The devices that actually take the weight of the pig are known as load cells. Quality sorting scales, such as those by Arlyn Scales, will provide two or four load cells. These cells should also be fabricated from stainless steel so they will not be affected by the difficult environment. It is also necessary to protect the electronics on the load cells from damage caused by rodents or other pests. The load cells should be designed to accept a much higher weight then they would normally be subject to, so that the high instant shock caused by impact with a moving animal will not cause damage. The automatic sorting scale includes a digital indictor to both control the process and to collect the data. Front panel controls are used to set the weight limits for multiple sorting groups. The digital display will show the weight of each animal as it passes through the pig sorter. At the end of any time period, the data collected may be read back from the scale. One method of more easily collecting this data is to write it to a USB memory stick. These devices contain enough memory capacity to store weeks, or even months of weighing data. Whenever necessary, the memory stick may be removed from the pig sorter and plugged into a standard pc. Software on the computer will read the data into a spreadsheet or database table. The data can then be carefully analyzed. In some situations, it is preferable to connect the sorters directly into a computer system. Industrial grade RS-485 networking can connect many of the sorting scales into their own network. An RS-485 to USB converter is then provided to connect the scales directly into the USB connector of the computer.